Tomorrow the XR rebels will again be standing in front of some bank, protesting against involvement in companies that work with fossil fuels. The rebels assume they will be heard. But do banks or companies in the global economy have ears? 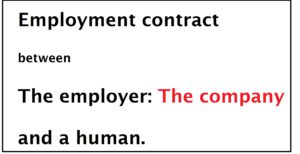 A human might listen to the demands of the XR rebels. But what about a company? The company doesn’t understand at all what these rebels want. The company has no sense for the problems of mankind. Inequality doesn’t matter. The company is only interested in maximizing profit, nothing else. And when the pressure from the street creates too much friction in the company, the company goes elsewhere. Globalization has cleared all paths for this.

In order to maximize profits, the company take any risk because its liability is limited. Whether the rainforests are cleared or the fish disappear from the sea does not matter to the company. Environmental disasters are part of the collateral damage of this action, which knows no risk.

The only thing the company cares about is getting the raw materials and workers for its production as cheaply as possible. Where these raw materials come from and under what circumstances they are extracted and produced is also completely irrelevant to the company. And the company particularly likes the fact that the products break down more and more quickly.

Those responsible in the company are bound by employment contracts to be loyal to this company. If they are not committed enough to fulfill this duty, they will lose their jobs. And those in charge would be reluctant to lose their top salary. If the company orders planned obsolescence or cheating on fuel consumption values for cars, the employees have to do this. Whether they want to or not. Their responsibility is limited to making sure the company is doing well.

So you can be sure that the promises made by the CEOs to the XR rebels are not meant to be taken seriously. In any case, the time when these promises will be fulfilled is far in the future. The company doesn’t hear what the company bosses promise at all, it has no ears.

The entire global economy is made up of such companies. These are big companies like Walmart or Amazon, but even the bike courier is at the mercy of his company. If he doesn’t get a few jobs in a row, he can’t pay his rent.

Many people are also concerned about reforming the existing financial system. These people forget that the financial system is a tool of the global economy. And it works excellently for the economy, as the rapid overcoming of the consequences of the Covid-19-induced growth slump has shown. The “invisible hand” will under no circumstances allow man to change anything about this financial system, which is ideal for the economy.

This development of the economy is not reversible. We are at the mercy of the corporations. And whatever we do, the company will respond to with the help of the “invisible hand of the market”. Conventional solutions will not get us anywhere. But we can do one thing, we can simply switch off the lights to the financial system.

From the market economy to the gift economy