Climate change is progressing and inequality in the world is increasing.

Human rights and climate activists are increasingly asking when politicians and business leaders will finally do something about it.

Rather, the question should be: why can’t anyone stop the economy, even though we’ve known for 50 years that growth is leading us towards disaster?

The answer is: The economy has the power. It determines what happens. The main reason we work and consume is so that the economy can grow. Instead of taking advantage of automation and resting more, it aims for full employment for all people. With all the side effects such as resource consumption, pollution, extinction and emissions of greenhouse gases.

Two years ago, during the first Corona-related lockdown, we briefly had the opportunity to immediately achieve the long-term climate goals. 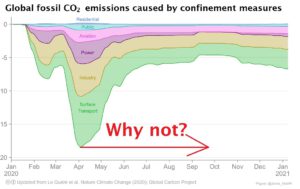 The global economy has us in its grip without us realizing it. Advertising that surrounds us at every step is tailored to our personality in such a way that we can no longer perceive it. There are said to be three times as many lobbyists in Brussels as there are politicians. Whose job it is to steer decisions in a direction that is favorable for the economy. So if we want to stop the economy, this would only be possible with the help of a dictatorship. Do we really want that?

But if we don’t want a dictatorship, then we must eliminate the tool of competition, and that is money.

Climate change is present. The first tipping points have been passed, many species have disappeared, the forests are burning, the polar caps and glaciers are inevitably melting. We cannot wait until 2050 to see if we will actually achieve the climate goals then. Almost every week we read in the newspapers that poverty and refugee flows are taking on unprecedented proportions.

We must face the unthinkable now! Maybe we can still avoid that something else and much worse destroys humanity.

The unthinkable is a

Global referendum to abolish all debt.

We could kill two birds with one stone. With a general worldwide abolition of all debt, we could liberate all people from the bondage of money. By doing away with all money at the same time, we avoid putting anyone at a disadvantage as a result. Because if there is no more money, then everything is gratis. Everyone gets what they need for free. All goods could then finally be distributed as needed. Economic growth is then history.

This paper describes an approach how the unthinkable can be made thinkable:

This is my private web page

From the market economy to the gift economy