Nothing bad happens when all the money in the world is gone. Nothing is taken away from anyone because then you get everything for free. It’s more convenient than the earth collapsing due to climate change.

There are devaluations from time to time. It is problematic when it happens unplanned and an economic crisis arises. But with good preparation, it has little impact on daily life.

To really understand how it works,
we can do a simple thought experiment.

Now we go to work because we need money to buy something to eat. Otherwise we will starve.

When the money is gone, we get the food for free. Out of gratitude for this we go to work the next day.

Both are exactly the same, only the former works with money and the latter without money.

We go to work or school as normal. But in the evening in the shop we get everything for free. All means of transport can of course also be used free of charge. We won’t even notice anything when the money is gone, because the wages or salaries are not paid until the end of the month anyway. And by then we have got used to it and enjoy that we get everything for free.

And the most important: Nobody has to sleep on the street anymore because he has no money.

And nobody has to starve to death anymore, because we no longer have to sell the food, we can then give it away!

The market has had its place throughout human history. Since there wasn’t enough for everyone, only those who had money could buy something.

But for a few years now we have been producing more than we can consume and if we continue like this we will turn our earth into an uninhabitable garbage dump.

What happens the day the money disappears?
All of humanity has been preparing for this exciting day Read More

The main reason for the abolition of money:

Politics has been disempowered by the market and by capital!

Since the the first report from the Club of Rome, The Limits to Growth in 1972 , the concentration of CO2 in the atmosphere has increased faster and faster. The 1st UN climate conference took place in 1995, but neither the 25 other climate conferences so far nor the Paris Agreement of 2015 have been able to change anything. This leads to ever faster warming of our planet and thus to a climate catastrophe. 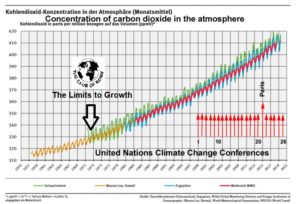 The diagram of the Federal Environment Agency shows that politics has  NO  INFLUENCE  on this.

Some economists propose a Green New Deal solution and economists at the World Economic Forum have a Great Reset in mind. There are also ideas for Degrowth or Doughnut economy. But they all know the equation doesn’t work.  Nobody knows how to slow down the growth machine of the economy. Letter to the chairman of the WEF

There is a solution to stop it!

Money can easily be abolished through a worldwide vote on currency devaluation without a substitute currency. The majority of humanity just has to vote for it!

A “voucher” like money is only needed if there are not enough goods available. But we already live in abundance and, thanks to the state of the art, we are able to adequately supply all of humanity with goods.

Since new investments are then free, the main reason for economic growth no longer applies!

Managers do not have to worry about how investments pay off, how the loans are serviced or how taxes are best distributed, but they can concentrate entirely on optimizing the conditions for their employees.

Everything else is free too. Daily needs, public transport, really everything.

Countries of the global south will have their debts taken off immediately and they can breathe a sigh of relief and conserve their resources. Countries in the global north can help indefinitely because humanitarian aid is then free.

And because you don’t need any more money afterwards, really nobody is at a disadvantage.

Most of the people I tell about abolishing money say, “For God’s sake! Humanity is far from ready! ”

I then ask, what are we not ready for?

It is therefore important that nothing changes so that the existing supply chains are not disrupted. The supply chain from the raw material supplier to the factory, from the factory to the wholesaler, and from the wholesaler to the retailer, to put it very trivially. And this chain will continue to function even without money because every employee in this chain does his or her job. Just like the employees of the power company, waterworks, sewage plant, drivers of trains, buses, taxis and trucks, medical staff, police officers, teachers, postal workers, etc. Road construction work continues, new machines are installed, and research continues. And each of the billions of employees goes to the shops in the evening and gets what they need to live. Or he buys the new television, the purchase of which had long been planned.

The solidarity of all humanity during the Covid-19 lockdown has shown that we are disciplined enough to keep the supply chains going, even if no money would flow.

And it gives our entire political landscape a real common task. In order for it to work, everyone must be motivated to carry on with everything just as before, so that the existing contracts are adhered to. To do this, all politicians have to pull together and it is completely irrelevant whether you have right, left, green, conservative, liberal or socialist views.

After just a few days, we will change our behavior when we notice that we have received everything for free. Much earlier than the ascertainment that we don’t earn anything because the salary or wages are usually not expected until the end of the month anyway. The changes come gradually. It will start with the fact that we don’t look at the prices. We will take the fruits and vegetables from regional organic cultivation that we had previously left because they were too expensive for us. And maybe we think about the fact that just as much manpower was used to produce it as for vegetables from cheap countries.

Unemployment need no longer frighten us. If employees in the auto industry or in the banking industry lose their jobs, they are still taken care of. Because it doesn’t mean that fewer breads are baked or fewer pants are sewn.

Because the formation of profit is excluded due to the lack of money, property does not have to be nationalized. Thus no revolution is required. Ownership is also important because it guarantees careful handling. We learned that from the collapse of socialism.

But we have to start now. The sooner the better.

Some still say – let’s look at each other, we’re greedy because of our nature.

That’s going to change. If we want to imagine how it should be, then we can imagine a party. That’s what leisure should be like. A party to which everyone brings something. Everyone is invited.

1 The idea
2 Why do we have to abolish money?
3 Sociopolitical considerations
4 How can we achieve it?
5 Private property
6 The transition
7 Development of the economy
8 Epilogue

From the market economy to the thanks economy